Magacoin, the pro-Trump cryptocurrency bags over 1000 sign ups since launch.

As per a report by The Guardian, Magacoin, the pro-Trump cryptocurrency has bagged over a thousand sign-ups. This is a rather commendable feat owing to the fact that the cryptocurrency was launched only last week. All those who signed up own only 100 magacoins at the moment. This is the initial amount given to anyone who steps into the magacoin domain for the first time. According to the reports from The Guardian, at the moment, the most number of magacoins is held by the creator of the same. A total of 75 million magacoins has been created according to what is stated on the website. 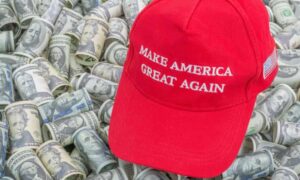 Magacoin was created in an effort to visibly express solid support for the former president, Donald Trump, in the wake of his loss in the November 2020 election. The total number of coins created till now is an acknowledgment of the 75 million who voted for Trump in the elections. Magacoin hence carries on its shoulder the mega weight of a big hope since it is in support of the candidates associated with the Make America Great Again candidates. The proceeds from the cryptocurrency will be channeled towards funding their future campaigns and elections.

A week after its launch, magacoin is still not a traded crypto coin. Neither is it listed on any major crypto tracking platforms. Magacoin, however, is not the very first cryptocurrency created in support of Trump. Magacoin can be counted as the successor of the Trumpcoin which was created to express support for the former president. If the reports are to be followed, approximately 6 million Trumpcoins are in circulation.

Magacoin has managed to garner the support of a string of radio hosts, bloggers, and some local MAGA personalities. The reason behind the support can be traced back to an ambassador program that offers a total of 1000 free tokens to those who promote the coin. According to The Guardian, the offer has been taken up by a notable number.

A security breach on the website associated with magacoin revealed user data unveiling the names of important right-wing personalities who have signed up as ambassadors of the coin, according to The Guardian.

Although these coins are in express support of Trump, it is not without a slight tinge of irony. Because Trump, up until now has not acknowledged the cryptocurrency or declared any visible support. Trump hasn’t been very optimistic about crypto in general. He has even said that bitcoin “seems like a scam.” And don’t forget his lengthy rant in 2019 on Twitter about crypto. One reason for his distaste toward cryptocurrency is their volatile nature and inconsistent value because of which he doesn’t exactly consider them to be actual money.