Mark Zuckerberg’s ‘like’ for a meme that took a jibe at Bezos turns heads.

Mark Zuckerberg recently found a meme that managed to tickle his funny bone. The meme was created by the popular meme account, Tank Sintara. It took a slight(or a blighted) jibe at Jeff Bezos for his comment thanking workers at Amazon for his space flight. Whether it was a case of humor being gratified or competition being magnified is another question altogether. What an irony that apparent dislike is expressed through a ‘like’. The world indeed has taken up irony in all its essence. 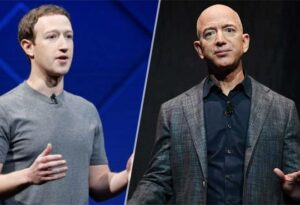 Although Mark Zuckerberg and Jeff Bezos aren’t involved in any open rivalry, it does not seem that they are appreciative of each other either. What is a business without good old competition after all. The meme that bagged a ‘like’ from the Facebook CEO, featured a still from the popular movie, ‘Joker’. 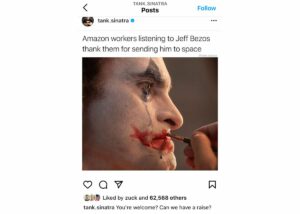 The ‘like’ first caught the eye of The New York Daily News and soon everyone took it up. Bezos’ brief flight to the edge of space had been the talk of the town ever since he embarked on the journey. Following Sir Richard Branson, Bezos too made it to the edge. However, it left certain people on edge and gathered a good amount of criticism. Apparently, most people could only see the insensitivity of the feat in the backdrop of the situation where the workers are being exploited. Add to this the comment by Bezos thanking the workers at Amazon for making his flight possible and we have a reason for treason(joke intended). No matter the good intentions of the gratitude, all that was lost on a good number of workers who felt that the comment rubbed them in the wrong way.

In fact, Bezos’ spaceflight even faced criticism from Sen. Elizabeth Warren and Rep. Alexandria Ocasio-Cortez. The disparities between the extravagant amount spent on the flight and the working conditions at the Amazon warehouse were too hard to ignore. The gravity of the criticism was also enhanced by the Pro Publica report that came out last month. Making a trip to space and not paying taxes for about two years did not go down well with a majority of the people.

Jeff Bezos and Mark Zuckerberg haven’t locked horns in public(yet) and there hasn’t been any trace of a visible animosity between the two tech moguls. The latter did not even comment in open about the space flight apart from the harmless like which is not really an open expression of rivalry(a topic open for debate.) The only common point between the two till now is the court hearing last summer.