Twitter is yet again overflowing hilarious memes after crypto prices go rocketing down. And those who have invested in the same are on the lookout for a catharsis point. Quite naturally they have found solace in Twitter as hilarious memes coming up from all directions are easing the fall or at least putting up an illusion of the same. 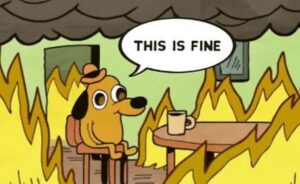 Memes and cryptocurrency go hand in hand. Whether the prices fall or rise, whether it is heartbreak or excitement, memes always occupy their rightful place every single time. And if you are in search of a vague silver lining amidst the chaos, we can console ourselves by saying that with the crash, at least the meme-making skills reached a new zenith.

Moreover, the prices going down is not a new scenario rather it is a part and parcel of this exciting and at times, overwhelming and cardiac-arrest inducing game. Those who have invested in crypto definitely signed up for both the ups and downs. However, it cannot be denied that every time the prices go down, the hearts plunge too. For now, we have the memes to look forward to. So let us flip through the hilarious memes and responses on Twitter that aren’t planning to stop anytime soon.

Now that is a perfect depiction.

Not everything happens for a reason after all.

Does anyone know why that #cryptocrash happened?

Are we talking about pickup lines and puns here? How poetic.

Hey, my name’s crypto. Can I crash at your place tonight? 😉

waking up to see the market is still down and im still losing my money omfg #cryptocrash pic.twitter.com/TtmyngkwhB

Some food for thought perhaps.

We never run out of optimism.

Stop being a bitch and buy the dip, #Hodl #cryptocrash pic.twitter.com/TEvCSXoC9g

Is that supposed to be a brain-twister?

Now that is some serious conversation.

Some valid, sarcasm-free reaction at last.

🐻It is bloody out there, but I did the following:

(1) Cut my losses on a few short term investments
(2) #HODLing on a few I really believe in that I am #farming
(3) Using what stable I have to buy the dip!#cryptocrash #Crypto #buythedip #NFA pic.twitter.com/RWLp25aeu9

A rather interesting question. The best part is we are still in the quest for a suitable answer for that.

Don’t care too much.

#cryptocrash
It's probably from the SEC going after Coinbase pic.twitter.com/ZDPnGtwmnr

The fire is raging.