With all of the Windows 11 hype in recent weeks, one event stood out: a rumored leaked build of Windows 11 surfaced online, and numerous tech outlets got their hands on it. Indeed, all of you were so enthusiastic to see the new Windows 11 OS and also interact that nobody hesitated for a second questioning where the leak came from.

On Twitter, there has been some discussion about whether the leaked operating system was really called Windows 11, given that the Windows 10 name appears numerous times in the system, such as when you open Windows Terminal, while the Windows 11 name only appears on rare occasions.

It’s time to put your doubts regarding the legitimacy of the Windows 11 leak to rest. Microsoft has issued DMCA takedown notices to websites that are hosting the leaked Windows 11 ISO, forcing those distributing the new operating system to delete it or face legal action.

Is Microsoft seeking justice for the Windows 11 leak?

Microsoft Japan has filed a case under the Digital Millennium Copyright Act (DMCA) against Beebom, an Indian tech news publication.

The claim from Microsoft is that some websites allegedly distributing unreleased Windows 11 ISO files that were copyrighted by the company. The Redmond-based tech giant also asked Google for the search results to remove Beebom’s article on similar concerns. The Indian website mentioned before was not Microsoft’s only target; other web-based third parties aided in the information leak as well. 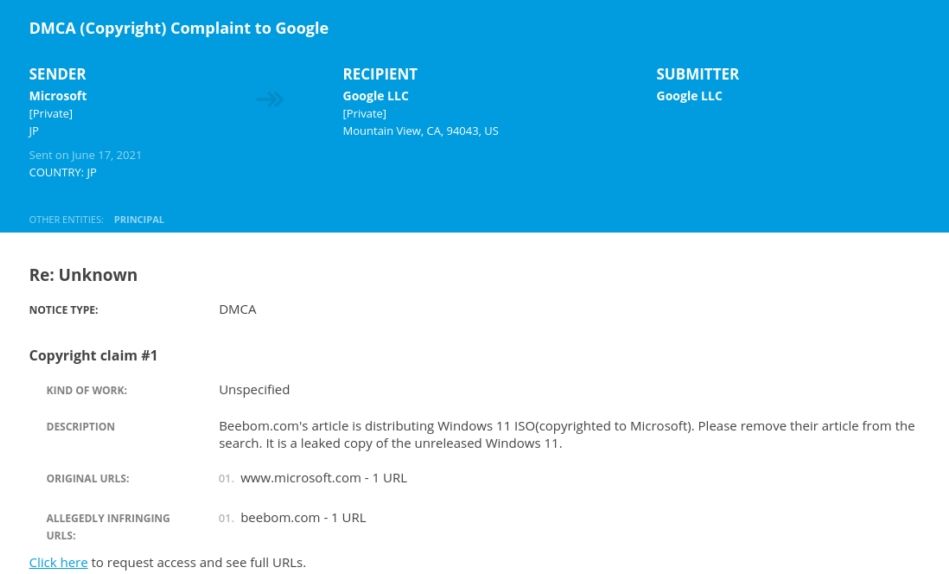 In the attached Microsoft Japan complaint, the company confirms the Windows 11 name, requesting that “Windows 11” ISOs be removed, claiming that they are leaked versions of “the unreleased Windows 11” OS.

And, despite the fact that the current version of Windows 11 offers very nothing, other than some UI tweaks, Microsoft still wants this spectacle to end as quickly as possible.

On June 24, Microsoft plans to host a special event to officially showcase Windows 11, and it is likely (and sensibly) hoping that users and enthusiasts would wait until then to pass judgment on the next release. Components like the Microsoft Store, which is rumored to be getting a substantial update, have yet to be shown off or acknowledged. Furthermore, the leaked version lacks other enhancements that will most likely be given via Feature Experience Packs, which may be delivered without the need for an OS update and are now exclusively available to authorized individuals.