Telangana Minister for Industry & Commerce KT Rama Rao welcomed Tesla CEO Elon Musk to set up its company in the state just a day after Musk tweeted out saying his electric vehicle (EV) company was experiencing “a lot of challenges” in launching its cars in India. 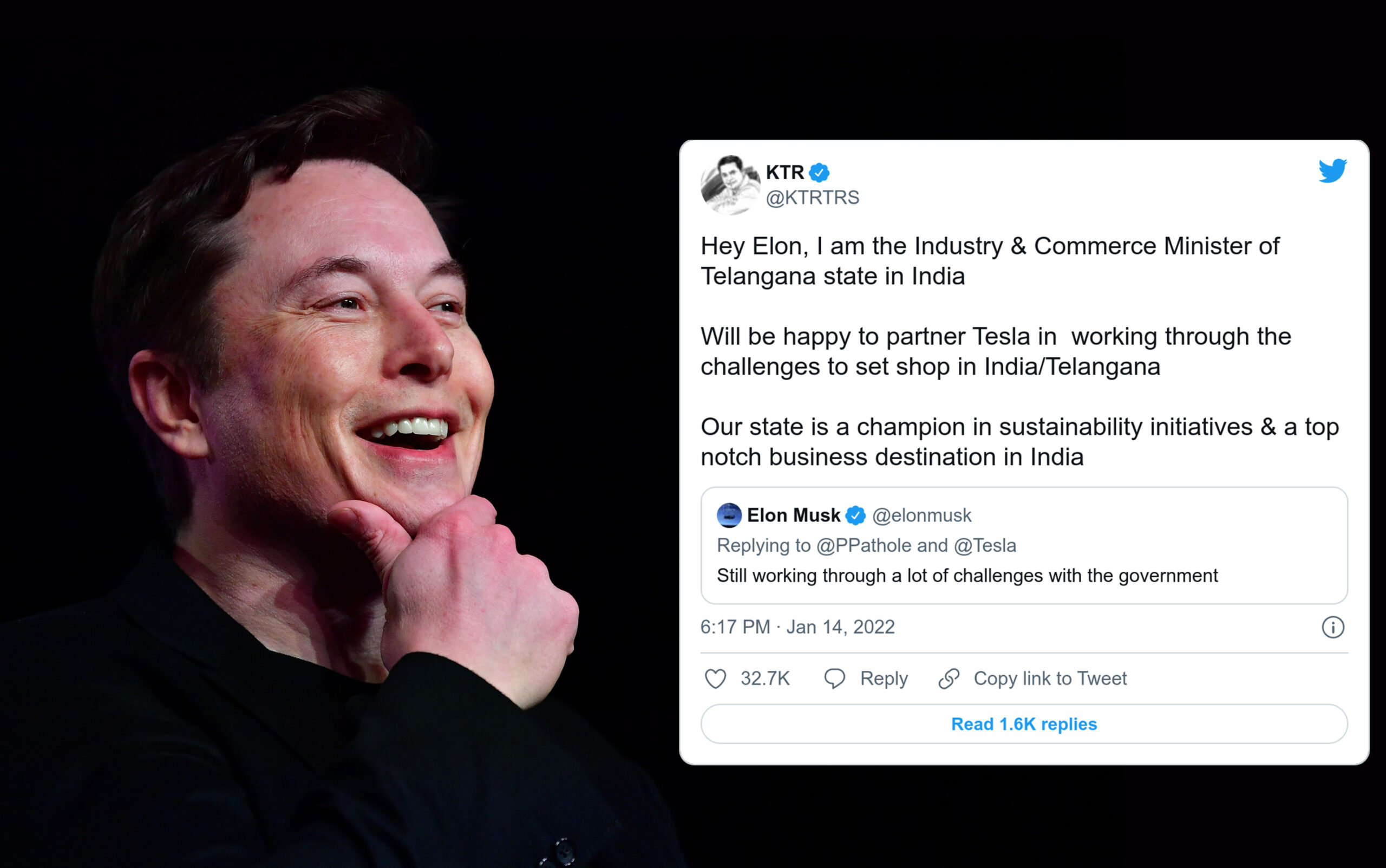 On January 14, Friday, Minister KTR replied to Elon Musk’s tweet about working through shortcomings with the government to launch in India by presenting himself and saying, “Will be happy to partner Tesla in working through the challenges to set shop in India/Telangana. Our state is a champion in sustainability initiatives & a top-notch business destination in India (sic).”

The world’s richest individual has been tweeting frequently, requesting a reduction in import tariffs so that his company’s high-performance electric cars can start selling in India. In response to Musk’s remarks, an unnamed government official stated on Thursday that Tesla was welcome to leverage the Production-Linked Incentive (PLI) window to manufacture electric vehicles in the country. Meanwhile, KTR’s tweet has turned out to be a silver lining for Tesla CEO Elon Musk. KTR has expressed his willingness to the billionaire’s plans to build an auto plant in Telangana.

On imported automobiles, India now levies customs tariffs ranging from 60 percent to 100 percent. The Government of India charges a 100 percent import tariff on fully imported cars with a CIF (Cost, Insurance, and Freight) value of more than $40,000, and a 60 percent levy on cars that cost less than that amount. Only one model, the Tesla Model 3 Standard Range Plus, is priced around $40,000, according to Tesla’s US website. If the American automaker had to import its Model 3 electric car to India as a CBU (completely built unit), it will cost around Rs 70 lakh.

Tesla’s efforts to convince the Centre to accept the proposal are important if the company expects to make its electric vehicles more affordable to customers in the country. While the government, on the other hand, wants Tesla to discuss its production plans in India before committing to any tariff concessions, Tesla argues that introducing its product at existing tariffs will not be a feasible business option for the company.

Musk’s argument opposing high import tariffs on vehicles imported from international markets ignited a controversy among Indian automakers. While some supported Tesla’s proposal, others argued that the Centre should also provide equivalent treatment to Indian automakers.

Mr. Rao was the backbone in encouraging a deal between the Telangana government and Kitex Group last year, which resulted in MD Sabu Jacob investing Rs 2,406 crore in his state. After Kitex walked out of Kerala, scrapping a Rs 3,500 crore project, KTR rolled out the red carpet and booked a special flight to encourage the businessman to sign a Memorandum of Understanding (MoU) with the Telangana government.