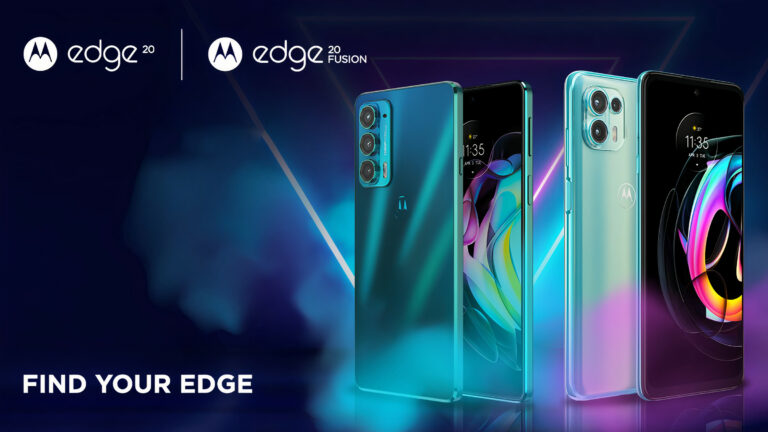 However, before we get into the price and availability of the devices, let’s take a closer look at some of the major specifications as well as features of the latest Motorola handsets launched in India.

The Motorola Edge 20 features a 6.67-inch FHD+ OLED display with a punch-hole selfie camera and a higher refresh rate of 144Hz. It also has a 10-bit color depth, a DCI P3 color gamut, and HDR10+ functionality. The phone is powered by a Qualcomm Snapdragon 778 processor with Adreno 642L GPU, 8GB of RAM, with 128GB of internal storage. The phone comes with Android 11 pre-installed and a fingerprint scanner on the side. It is fueled by a 4,000mAh battery with 33W quick-charging capability.

On the back of the Edge 20, there’s a triple camera system with a 108-megapixel primary camera, a 16-megapixel ultra-wide-angle lens, as well as a telephoto sensor with up to 3x optical zoom and up to 30x digital zoom. The front-facing shooter is a 32-megapixel sensor, and the smartphone includes standard connectivity features such as 5G, 4G LTE, dual-band WiFi, MIMO, Bluetooth 5.2, GPS, and others.

The Moto Edge 20 Fusion, on the other hand, has identical specs and features to its international counterpart but is powered by a more powerful MediaTek Dimensity 800U SoC. It has a 6.67-inch FHD+ OLED display with a single punch hole camera module on the front, just like the Edge 20. However, it only has a 90Hz refresh rate, with HDR10+ support, alongside 10-bit colour, and a DCI P3 colour gamut.

In addition, the smartphone has up to 8GB of RAM and 128GB of internal storage. It does, however, include a larger 5,000mAh battery pack that handles 30W faster charging. It has a triple camera configuration on the back, identical to the Edge 20, with a 108-megapixel main shooter, an 8-megapixel ultra-wide-angle lens, as well as a 2-megapixel depth sensor. The front features a selfie shooter with 32 megapixels sensor.