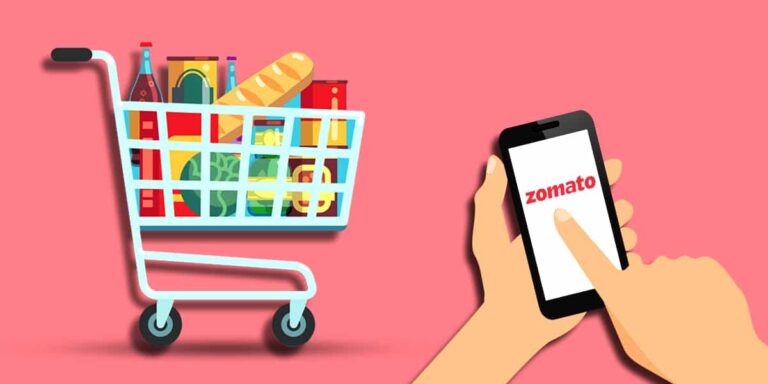 After discontinuing grocery delivery services in June last year, India’s largest online food delivery platform Zomato Ltd, which will launch its blockbuster public listing on July 14, now aims to relaunch the grocery service in the coming quarters. This comes after the company confirmed its investment of $100 million in the online grocery startup Grofers.

During the first wave of Covid lockdown across the nation last year when most people were stuck indoors, the Gurugram based food tech startup, Zomato saw an opportunity and started delivering essentials and groceries items via its Zomato Market app to focus on a rise in demand for e-groceries. Apparently, after a few months, the company suspended the service to focus on its online food delivery business.

Although, Zomato’s prime competitor, Swiggy, still has a presence in this online grocery delivery sector. Tata digital recently purchased a majority share in BigBasket, in planning to launch its Super App. Furthermore, Zomato’s HyperPure initiative provides restaurants with fresh and high-quality rations such as vegetables, fruits, groceries, spices, and other items.

However, Akshant Goyal, Zomato’s Chief Financial Officer, did not specify a specific date for restoring operations. But he stated in a statement, “Food delivery business was hit in the first wave of Covid due to fear of virus and surface transmission. The fear of surface transmission has gone away and we have delivered crores of orders in the last 18 months without even a single case of transmission through food delivery.”

Even during the pandemic, the company’s average order value (AOV) has been gradually increasing. It climbed to Rs 395 in the fourth quarter of the previous fiscal year, slightly higher compared from Rs 287 the year before.

Last week, Zomato requested the Competition Commission of India (CCI) for approval to purchase around 9.3% holding in Grofers India Pvt. Ltd and its wholesale subsidiary Hands-On Trades Pvt. Ltd. Grofers is estimated to be valued at a little more than $1 billion after the $120 million investment, which includes participation from New York-based investment firm Tiger Global. The food aggregator, Zomato also announced on Thursday about its Rs 9,375-crore Initial Public Offering (IPO), which will open for subscription next week.