Tesla Model 3 won many awards already now. And it continues to excel. Best selling EV award goes to Tesla Model 3 in the first quarter of this year. If you are one of those, who are following Tesla for a long you must know about their manufacturing troubles. As Elon Musk himself once said there are times in the year when it is best to buy Tesla Model 3.

It is said that this increased the demand for Tesla. Somehow the production hell made it more popular than expected.

Being the best selling EV

For obvious reasons, being the best-selling EV is more than manufacturing. Also, the $38,990 Tesla Model 3 is popular and has successfully battled with much cheaper EVs in the market. 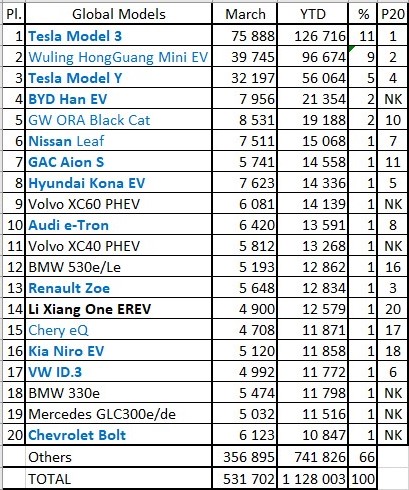 As seen in the data available, the second place in the list is Wuling Hong Guang Mini EV. It is the cheaper version having more market in China than Tesla Model 3. However, it is said that other cars couldn’t match with Tesla Model 3’s range, quality, and performance with its budget.

BYD, backed by Warren Buffet, is another tough competition for Tesla. The company has been coming up with various strategies to increase its target in China.

Finally, let’s not ignore that Tesla has two cars within the top five. Tesla Model Y is in third place with its sales. Eventually, as Tesla’s self-driving system comes, these sales are expected to go higher.

As the tweet says, though the Model Y is currently in the third position, there are high hopes. It is expected that in a year or two, the Model Y will be in the top position.

There have been talks on Tesla launching their self-driving system in the UK and in Europe. Moreover, the Tesla Model Y is manufactured in such a way, to adapt to more changes like installing the FSD Beta (autonomous driving system software).

Contrary to the Tesla Model Y and 3 sales, the older version took a low turn. It was much expected, hence leading to lower production of the other models.

Cybertruck is another product of Tesla. It is a bulky truck, which Elon Musk himself drove to the Giga factory in Texas. It is said that the Cyber truck already received more than 1000 pre-orders.

Despite being perfect in everything, Tesla is known to change prices in three months or more. Usually, once a product is released, the price eventually goes down later with time. However, in China, the Tesla Model Y’s price was increased within few months of its release.

It is said that Tesla is focusing on its expansion in Berlin and China. Hence, the increase in price is expected to help cover the costs for other factories. Moreover, Shanghai’s Giga factory starting setting up a recycling process.

With everything going on, the Tesla Model 3 made it in the market. Though most of its sales are from China market,  the car is the leading EV on earth. And Tesla doesn’t seem to want to back down.