Chinese rocket comes down, memes and jokes rocket up 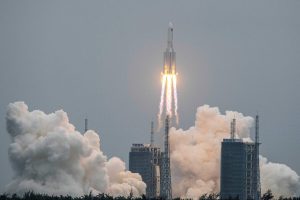 Discussions and speculations concerning the out-of-control Chinese rocket have been in the air, making people squint at the sky for something huge and fiery that might drop out of the skies any moment. We might not get to see an actual dramatic entry of Thor or Superman, but we never run out of rocket debris to serve the need. And thanks to social media, humor, or dark humor, there is always enough and more of that. The rocket goes up, then it comes down, and in between the internet launches its own set of memes and jokes, almost doing away with the possibility of rocket debris hit apocalypse.

Putting all the speculations to rest, the debris from the Chinese rocket made an entry into the earth’s atmosphere on Saturday night. And not to joke, but not even the entry of a superstar could elicit such a response and well-thought-out memes from the internet. Whoever thought that something as scary could be a funny meme people scroll through, talk about not taking life too seriously.

While the memes and jokes were adding a pinch of humor to the potentially serious event, some users also expressed concern over the plight of the ocean that will be degraded with these remains. After all, oceans weren’t built to be the resting ground of all those broken dreams and spacecraft.

Never have I ever seen a weather report so rock solid, literally

And then the story of the never-ending wait, only for the hopes to touch the ocean-bed, again literally

While some were lucky enough to be blessed with the rare sight, seems like others have to wait for another rocket to be launched by China

Okay finally I saw the rocket passing by my city ☄️🌍

Even some classic memes couldn’t help but raise their heads, for it’s not every day you look up at the sky and expect to see a piece of innovation rushing headfirst to god-knows-where

And then there are the constant and persistent efforts of China to surprise the world with something monumental every year. And this time they took it to their hands to make sure that we look up at the skies with awe and wonder. And if not for the Indian Ocean taking the hit, wonder would have turned to blunder in no time. The skies have spared the humans and the poor families of the fishes and crabs wouldn’t even have had an idea of what hit them.