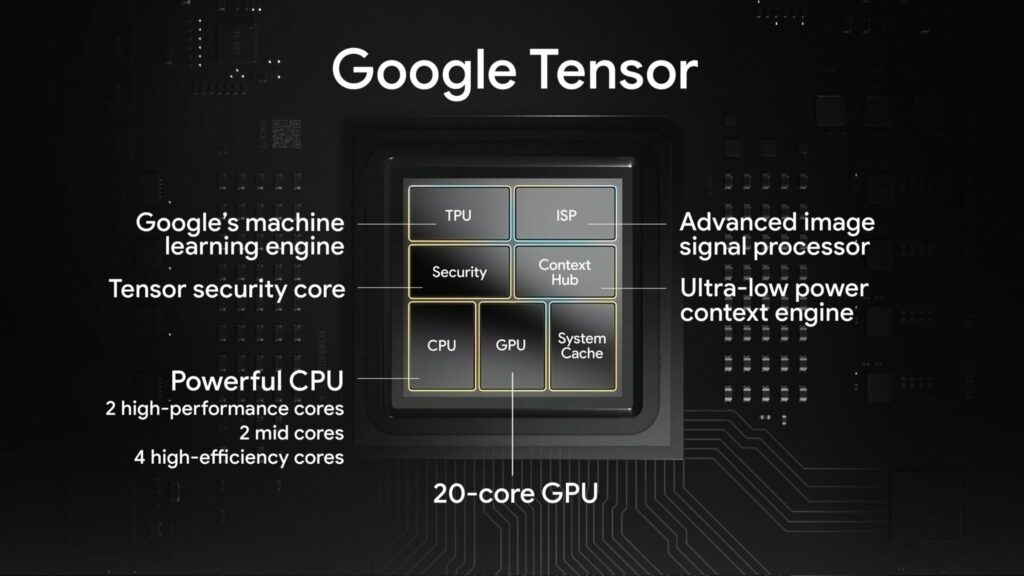 Google was overjoyed to announce Tensor, its first system-on-a-chip, in August. We knew it would power the Pixel 6 and 6 Pro, and it was an attempt, similar to Apple’s A-series mobile CPUs, to combine Google’s software with some custom-tuned hardware. Google, in particular, positioned Tensor as an AI powerhouse, providing greater hardware for image processing and speech recognition in its new phones. We finally understand what makes Tensor tick.

Google’s SoC is a 5nm eight-core architecture with large, medium, and tiny cores. Two ARM Cortex-X1 cores operating at 2.8GHz are at the helm. This is significant since Qualcomm’s flagship Snapdragon 888 CPU, which powers the Galaxy S21 and many other high-end phones only have a single X1 core. It will be fascinating to see how much quicker Tensor is in contrast.

The SoC additionally has two Cortex A76 cores operating at 2.25GHz, as well as four 1.8GHz A55 cores as “little” bits. Fortunately, Google did not scrimp on graphics: the Tensor includes a Mali-G78 graphics processor, which is also seen in other flagship Android phones.

All of this discussion of bespoke hardware may conjure up memories of Google’s ill-fated (but brilliantly imaginative) Moto X, a 2013 attempt to develop a smarter smartphone. It wasn’t the most powerful smartphone on the market, but its always-on voice commands were a good step toward ambient computing, which Google is still working on with the Tensor processor.

With its Live Translate function, the new SoC allows the Pixel 6 to swiftly translate videos and texts, and it will be smarter about recognizing your voice as well. This should be especially useful when using your voice to type, modify, and send messages. Most crucially, it will be able to perform all of this without depleting the battery. According to Google, the Tensor processor will be around 80% quicker than the Pixel 5. That’s a big number, so we’ll have to put the Pixel 6 through a lot of testing to validate it.

Furthermore, Google claims that Tensor adds an added layer of protection to the Pixel 6. It will collaborate with the phone’s Titan M2 processor to guard against viruses and other possible assaults. That’s a fantastic step forward for Google, and we hope to see additional security hardware in future Android phones.

Tensor looks to provide everything we’d expect in a new mobile processor at this point: fast speeds and a slew of forward-thinking AI functions. It has the potential to make Google’s Pixel phones the actual iPhone equivalent: Flagship hardware that collaborates with a special mobile chip. (And if Google is genuinely successful, Tensor may find its way onto other firms’ gadgets).