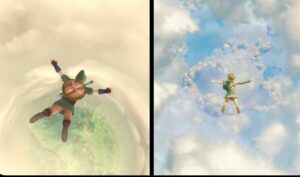 Nintendo’s E3 presentation is filled with excitement and surprises, keeping the users on edge with anticipation. Today, it captured the attention of the audience by giving them yet another glimpse of The Legend of Zelda: Skyward Sword HD. Skyward Sword HD holds the promise of remaining and improving the experience of the original Wii title. Thus the excitement and frenzy on the part of the users are quite reasonable and completely justifiable. Because, for those who have experienced it, gaming is an art, and anything that makes it more spectacular will be welcomed with open hands.

The Legend of Zelda: Breath of the Wild 2 is planning for a release in 2022. #NintendoDirect #E32021 pic.twitter.com/NsLUPx0gXS

The E3 event has been creating news ever since it commenced with exciting new reveals and improvements, and Twitter has been bearing witness to the same for the past few days. These days, the initial; reflections of every event fall first on Twitter and the same goes for Nintendo’s presentation. Fans couldn’t contain their excitement and it has inevitably spilled on to the social media platform. The responses and reactions are at full flow and it gets all the more interesting with every bit of news.

Here is a set of the best reactions and responses from Twitter.

Looks like the brilliance of the parallels is unparalleled.

me waiting for them to announce anything for ACNH😐 #NintendoDirect pic.twitter.com/NnodfWmN5Y

Brilliance and splendor in a nutshell.

Return to Hyrule – and the skies above – in this first look at gameplay for the Sequel to the Legend of Zelda: Breath of the Wild, planned for release on #NintendoSwitch in 2022.#NintendoDirect #E32021 #TheLegendofZelda pic.twitter.com/Us7bPm3J2U

Nintendo has managed to strike the right nerve yet again.

#NintendoDirect saved the #E32021 with that BOTW2 teaser, it looks amazing. pic.twitter.com/fAyvF3zNcT

Everything gets better with time.

It would not be wrong to say that Nintendo knows how to play and game, and definitely, it knows to win.

Sour grapes are inevitable though.

Breath of excitement on point.

And finally, we have a winner. No game is complete without one.