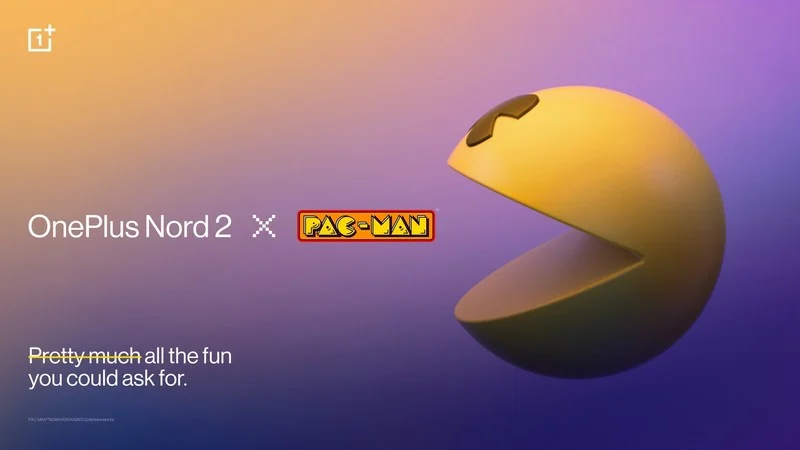 The device’s back panel features a maze-like design inspired by the iconic video game. It also shines in the dark. The firm has provided specifics regarding the design, but the actual unveiling will take place in the following days.

According to Oliver Zhang, Head of Product at OnePlus, in an Android Central interview, the next limited edition smartphone would include a “gamified UI.”

OnePlus appears to like collaborating with various companies in order to grab the attention of potential customers, such as Star Wars, Marvel, McLaren, Harry Potter, Hasselblad, and others. The Pac-Man Edition is the most recent addition to the limited edition lineup.

The OnePlus Nord 2 Pac-Man Edition will include a special OxygenOS skin with design modifications including as bespoke live wallpapers, animations, and the pre-installed Pac-Man 256 game. The smartphone will also include a bespoke camera filter, according to Zhang.

The OnePlus Nord 2 has a 6.43-inch full HD+ Fluid AMOLED display with a refresh rate of 90Hz. It is driven by the MediaTek Dimensity 1200-AI SoC, which is combined with up to 12GB of RAM and 256GB of storage.

It is powered by Android 11 with OxygenOS 11.3 on top. The smartphone is powered by a 4,500mAh dual-cell battery that supports Warp Charge 65 rapid charging technology developed by the business.

According to a new report, the gadget may be launched with the Qualcomm Snapdragon 778G SoC rather than the MediaTek Dimensity 1200 AI SoC.