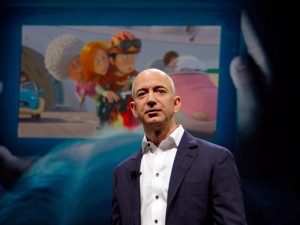 Amazon is set to report second quarter fiscal 2016 earnings results after the closing bell Thursday. The e-commerce giant will look to extend its dominant earnings momentum, which has sent its shares soaring to all-time highs. For full the year, earnings are projected to rise 332% to $5.40 per share, while revenue of $133.97 billion is expected to rise 25% year-over-year.

In its earnings release, Amazon CEO Jeff Bezos touted the company’s expansion into India, a market it committed to invest $5 billion last quarter. “It’s been a busy few months for Amazon around the world, and particularly in India – where we launched a new AWS Region, introduced Prime with unlimited free shipping, and announced that Prime Video is coming soon, offering Prime members in India exclusive access to Amazon Original Series and Movies – including original content featuring top Indian creators and talent,” he said.