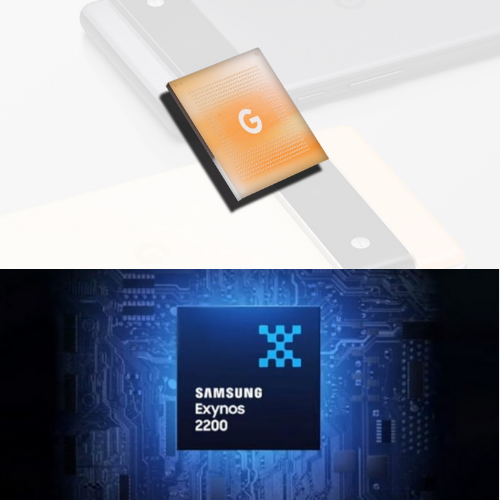 After showcasing the Pixel 6 line of smartphones, Google received a lot of positive feedback. The fact that the Pixel 6 series of smartphones is the first set of Google devices to employ an in-house CPU, Google Tensor is the major reason for their popularity.

The Google Tensor is the search engine giant’s first bespoke silicon. This is a homemade CPU that looks a lot like the Apple A14 Bionic. With an in-house CPU, the Pixel 6 series of smartphones are expected to receive prolonged software support, similar to Apple’s iPhones.

Samsung is one of the main worldwide smartphone companies that use a proprietary in-house Exynos CPU, and Google Tensor might just be a rebranded Samsung Exynos engine. The Exynos 2200, also known as Whitechapel internally, is expected to be announced soon. It’s worth noting that the Google Tensor is also referred to as Whitechapel.

The Google Chapel, according to Galaxyclub, is nothing more than a repackaged Exynos 2200 CPU. Because the Exynos 2200 is expected to be the first mobile CPU to have AMD’s RDNA2 GPU, the Google Tensor might also include the RDNA2 GPU, making the Tensor SoC one of the most powerful graphics cards on a smartphone chipset. These rumors might be genuine, given the recent development between Google and Samsung, when the two companies pooled resources to build WearOS. The Exynos 2200 is anticipated to be a performance beast, so we may expect the Google Tensor to be the same.

The Tensor processor, which employs a security core and Titan M2, offers the highest possible security, according to Google. In addition, the CPU is believed to include next-generation AI (artificial intelligence) and ML (machine learning) to boost the photographic capabilities of the Google Pixel 6 smartphone series.

According to rumors, the Google Tensor is a flagship CPU, thus the performance of the Tensor SoC should be comparable to the A14 Bionic and Snapdragon 888+ SoCs. In addition, the Tensor CPU is expected to have connection technologies like 5G, WiFi 6, and Bluetooth 5.0.

Google’s Tensor chip is one of the technologies for which the company has received a lot of praise from tech fans all around the world. The chip does, however, assist Google in remaining autonomous when it comes to purchasing processors from chip manufacturers such as Qualcomm.

Also, with their own processor, Google will have total control over their smartphone range, allowing them to do things like providing more software for longer periods of time. Apple has already adopted this technique, with Apple devices receiving software upgrades for up to 5 years!