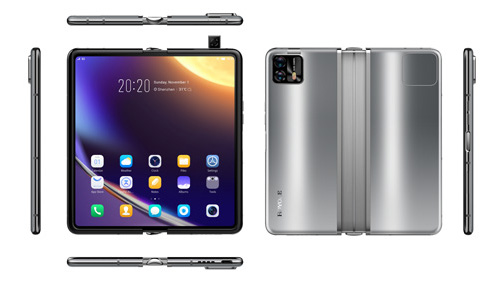 Royale will be getting pop-up selfie camera support for its next foldable
Image Credits: EV Leaks

Royole introduced the first foldable phone in 2018, which now seems like a lifetime ago. The original FlexPai lacked finesse, but it did create a space for Samsung and Huawei to exploit. Royole appears to be working on the third edition of its foldable phone.

A photograph revealed by tipster Evan Blass gives us our first look at the Royole FlexPai 3, but what can we infer from it?

How about this? (Royole F3) pic.twitter.com/Va0L5PuPkP

To begin with, Royole is removing the vertical camera bar found on the FlexPai 2. Instead, it has chosen a square back camera array with at least two visible cameras. The phone appears to include a pop-up camera on the front for selfies and video calls.

The display spans more of the phone’s front due to the lack of a vertical camera bar, but this does not suggest that the FlexPai 3 has shorter bezels or a more compact hinge.

A speaker grille surrounds a USB-C port at the phone’s bottom edge, and what seems to be a fingerprint sensor is located on the Flexpai 3’s right side.

What about the specifics? According to a February TENAA file (via GSMArena), the Royole FlexPai 3 might sport a 7.2-inch display, a 3,360mAh battery, and a 7mm thick unfolded shell. This would make it smaller and may be less expensive than its predecessor.

The FlexPai 2’s main selling point was, predictably, it’s low pricing. At launch, it was $500 less expensive than the Galaxy Z Fold 2. If Royole follows the same pricing strategy as with the FlexPai 3, a price of less than $1,300 is not out of the question.